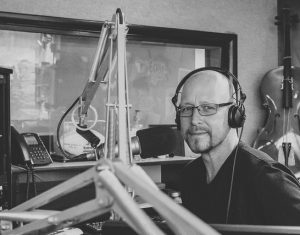 I started radio while in high school on a student ran radio station. We played everything from Cream to Metallica. This was the early days of Metallica, when no other radio stations would touch them. From there, went to college for radio and eventually landed my first job in radio as a mascot! Yep, here I was, big time…….. Dressing up as an alligator. It was fun, as I would dress up for college football games and all the students would yell at me to go back to Florida. Then I went to an afternoon position in Arizona for a rock station. There we made on air bets that I never won, which put me in a skirt, on main street, during the morning commute. Ah, yes the early days of radio.

I’m a rock guy at heart, although I do appreciate good music in any form, yes, I know that is subjective. I have been converted into a cat guy after being on Jimmy Kimmel. Perhaps I’ll explain that sometime and do I dare say that I am a huge Raiders fan. Is that safe to say around here? If not, you can change it to Green Bay or The Vikings if you want…..
I am very thankful for still being able to do this. Things have changed a lot from the album days and I know there are far more options to choose from, so thank you as well for listening, as that’s what enables me to continue on this journey.

Biden administration to allow migrant families separated at border to reunite in the U.S.